Truth be told, Life Improvement Media is not my first business rodeo. I believe I’ve even worded that the same way in a previous blog about my past. My blogs are part of the process to open my audience up to business ownership and entrepreneurship. In this blog, I’m going to walk you down memory lane and share the story of the original Life Improvement Radio studio!

How The First Studio Was Started

The idea formed because the wellness center was featured around town on television spots and interviewed on the air on a Tampa Bay radio station. In the hot seat that day was where I came up with the idea to create my own studio.  The goal behind creating a radio studio was to bring in more business. At the time, my business was a health and wellness center. We had a large building in Pinellas county with plenty of extra room.

The landlord at the time was very concerned bringing in a radio studio to the wellness center would fowl everything up. He was concerned about damages and resale value, while my team and I were focused on new business and of course, new revenue. I approached him and shared my vision and how no part of the studio would be integrated into the building’s foundation in any way.

Creatively, we hung thick moving blankets on the walls. We purchased sound-deadening foam to lay on the floor. We wrapped the room in green screen, which became our video screen for next door. A booth on the other side of the wall was where we handled our voiceovers and all our recordings. Like Tim Ferriss said, we applied the MED or “minimal effective dose”—minimal effort for maximum results.

The studio itself was literally next to the doctor’s offices with a full floor-to-ceiling window. As a way to be official, we had our own ON AIR studio sign. When we were broadcasting, you better believe it was lit! Unfortunately, we don’t have any pictures of this first studio.

Merging the Wellness Center with the Radio Studio

More business for the wellness center meant educated clients and vice versa. We spoke to staff and guests about the benefits of our services and living healthier lives. During the introduction of the radio component, the wellness center was transitioning itself as well. The original methodology of a chiropractic office expanded to a full-scale wellness facility. We added products to our existing practice such as skincare, weight loss supplements, nutrition coaching and mental health counseling to bring more people through the door.

Life Improvement Radio’s studio helped round the business out where everything was handled under one roof. Ultimately, putting the content out for free on the Internet gave our listeners the time and opportunity to listen. Going back to the early days, our target audience hasn’t shifted. Primarily, Life Improvement Radio’s (now Helium Radio Network’s) most common listener is the 25-55 year-old mother, college-educated with at least one child, married with a combined household income of $100,000 or above.

At Three Birds Tavern in downtown St. Petersburg (DTSP), the radio team and I sat down and brainstormed. We pitched the idea to a group of people who were interested in having their own show. We launched with between 40 and 50 radio shows: sports, arts, creative, music, comedy. You name it, we had it. In the first 9 months, we ballooned up to 100 shows.

That same year, I segregated myself from the wellness center. I wanted to fix a growing problem in the marketing industry and created my own marketing agency. We found a space in downtown St. Petersburg and converted it to our new offices. The same radio studio moved from the wellness center to the same building, on the other side of the wall. The studio itself had beach-themed and Florida scenery painted on the walls. Essentially every wall including the window shades was its own mural.

In that same studio is where we interviewed authors from the Miami Book Fair. Rappers and musicians came in to the studio and played music with us. Hundreds and thousands of podcasts were recorded in that same studio. We covered many popular events for Creative Loafing. For those readers who want to explore all our shows library, our new digital podcast library is up, but under construction. We’re adding more every week. 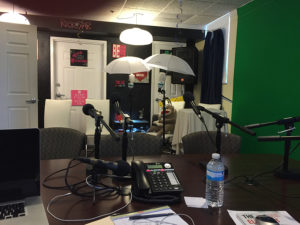 Having our footprint in the downtown community enabled us to better plug into the health fairs, fun runs, things of that nature. We sponsored local events as well and brought many guests and networking contacts and opportunities into the studio. As a matter of fact, we launched Life Improvement Radio After Dark from that studio on April 1, 2013 (better known now as Helium Radio After Dark).

Life Improvement Radio held the office space in DTSP for 5 years almost to the day, believe it or not. At that time, we realized our larger competitors were changing with the advances in technology as well. The actual studio model was an antiquated way of producing Internet radio. The opportunity to save money was big, which was a win-win as the cloud was the emerging technology of the time. We still had a stable way to interview guests on the airwaves using the Internet.

When we proposed the virtual model, everyone, especially professional businessmen and business women were thrilled. A one-hour radio show really took 3 hours from the time of leaving their office, driving to the studio, recording and traveling back. Virtual broadcasting allowed them to podcast with the minimal effort on their part.

In April of 2015, we decided turn virtual to compete with the industry’s big players. The strategy behind moving was to downsize and streamline the process of interviewing our guests. Simplifying the process meant our team had more opportunities to grow as well. We brought on more show hosts in less time by not having the brick and mortar studio. Scheduling conflicts were gone and we could pre-record audio when it was more convenient for the show hosts.

Stay tuned with Helium Radio Network as we grow even higher! Thank you for your attention!